We went out this morning, a very pleasant autumn Saturday morning, and did our round through a schoolyard, part of Raglan Street, and over the swinging bridge and around the museum. I was surprised to see there was relatively little recyclable material on our route. Usually, on a Saturday morning, which of course follows a Friday evening, we expect to find a lot of junk food packaging. This was not the case this morning, and I wonder if, with the cooler weather, people are less likely to be strolling around with junk food.

We also noticed, or should I say didn't notice as much stuff on the roads because there are so many piles of autumn leaves. They either cover or disguise a lot of what there is. It may be that we have less reason to be blue box walking for the next few months.

I can't say that I am too disappointed with that, because teary eyes and runny noses are some of the things that discourage me from cold weather walking. On the other hand, my companion barely notices the change in temperature and would not turn down a walk under most circumstances.

Keep on blue box walking,
Ray and Josh
Posted by The Padakun Centre for Contemplative Walking at 08:48 No comments:

Its not that often I go out Blue Box'n in wet weather. And for good reason. Everything is wet - duh!
Me and the Blue-box Dog went out this AM. Not only was everything wet, it was frequently embedded in soggy fall leaves. We both got home with muddy and wet feet.
Its days like these, combined by the sheer volume and ubiquity of collectibles, that make me wonder why bother. You really gotta smell the air, soak up the colors and bask in the companionship of my best friend. You can't ever think this is about a conclusion. There will never be a point where its done, where you got it all. There will always be people who think its fine, thank you, to empty their truck-cab out at the edge of a parking lot, people who finish that Frozen-Gack from Mr. Burger Hortoon and drop the container on your lawn. Its a process. Its like me and Josh (or any dog), there'll never be a point where he'll say he doesn't want a walk. Its a process of care.
Happy BBW-in' !

Posted by The Padakun Centre for Contemplative Walking at 11:53 No comments: 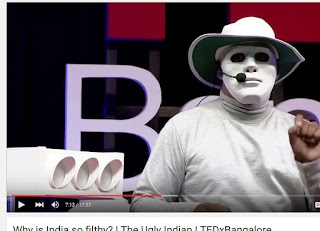 I have posted a video entitled, Why is India So Filthy?, on a separate page. I saw this several months ago and was deeply impressed by the ideas presented in it. The video is part of the famous TED talks series, this one recorded in India itself. The presenter is an Indian social activist who has initiated numerous community improvement projects based on the idea that if people's urban environments are treated with respect, they will come to similarly treat them with respect. The group of activists enters a community where they determine the environment, sidewalks walls green space and so on, has been degraded by inattention and disrespect. They acquire inexpensive resources and use their own time, without salary, to rehabilitate the area.

What strikes the viewer is the highly unusual masking of the presenters face. I believe this is the only time the talks have allowed this, and they do so because it is part of the philosophy of these activists that they complete their interventions with complete anonymity. They prefer to emphasize such nameless faceless engagement as the model for social responsibility. They want to represent that anybody, not just some high profile or individual, can demonstrate care and responsibility in the environment.

CATCH OF THE DAY: I'M RICH!

I may be able to retire after today, I struck it rich with a crisp green $4.00 bill . Yeah I know its Monopoly money but pretty soon it will be on par with the Canadian dollar! 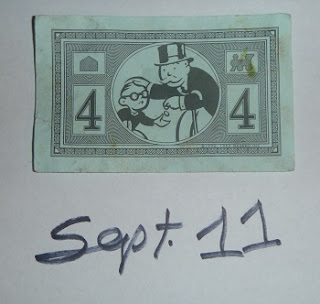 Posted by The Padakun Centre for Contemplative Walking at 07:15 No comments:

Went to the Home Hardware today and found this excellent heavy duty (and Blue!) collection bag. Its solid and replaces the bag I had been using. Its much more durable and will not rip like the others have. Only $9.95 at the Renfrew Home Hardware. 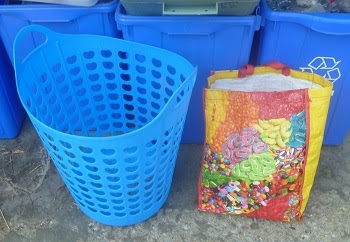 Posted by The Padakun Centre for Contemplative Walking at 10:11 No comments: 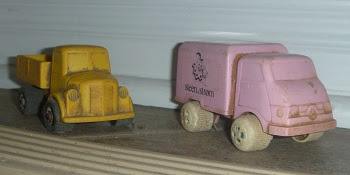 Posted by The Padakun Centre for Contemplative Walking at 10:09 No comments:

Did a couple of trips this weekend and had no trouble filling the bag.
This seems to be the pattern for this area of town:
1. plastic drink cups with lids and straws
2. assorted paper - from napkins to a 12-can beer case
3. pop and beer cans
4. anything else - sox, fragments of foam packaging, a whole kids bike

The best find was two wild fruit trees - one plum, one crab apple. Lots of sweet and juicy fruit for picking.

reduce the waste while you reduce the waist,
Recyclin' Ray
Posted by The Padakun Centre for Contemplative Walking at 14:09 No comments: